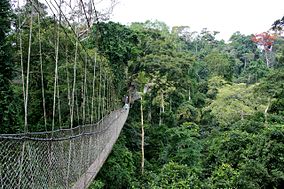 Kakum National Park located about 25mins. drive from Cape-Coast, Kakum is a virgin tropical rain forest with abundant of very tall trees, medicinal plants, birds and diverse insects and mammals. Kakum National Park covers an estimated area of about 357km square. Most trees have an average height of about 65m, making it ideal for it’s suspended canopy walk.

It accommodates about 550 species of beautiful butterflies you can’t find any where on this planet. Some of the world’s  most important species of birds approximating about 200 are also found here.

The most notable endangered species of fauna in the park are Diana monkey, giant bongo antelope, yellow-backed duiker and African elephant. It is also an Important Bird Area recognized by the Bird Life International with the bird area fully overlapping the park area. The bird inventory confirmed 266 species in the park, including eight species of global conservation concern. One of these species of concern is the white-breasted guineafowl. Nine species of hornbill and the African grey parrot have been recorded. It is very rich in butterflies as well, and a new species was discovered in 1993. As of 2012, the densest population of forest elephants in Ghana is located in Kakum.[