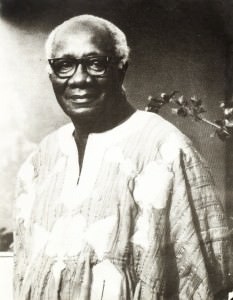 Nana William Ofori Atta ,popularly called “Paa Willie”, was a founding member of the United Gold Coast Convention and was one of “The Big Six” detained by the British colonial government in Ghana (then Gold Coast). He later became a Minister for Foreign Affairs in the second republic between 1971 and 1972.

William Ofori Atta was a founding member of the United Gold Coast Convention. He won one of the Akim Abuakwa seats during the 1951 Gold Coast election. He later became the leader of the United Party in opposition to Dr. Kwame Nkrumah. He was detained by Dr. Kwame Nkrumah during the first republic under the Preventive Detention Act. During the second republic, he was Minister for Education and then Minister for Foreign Affairs in the Progress Party government of Dr. Busia. He was an active member of the People’s Movement for Freedom and Justice (PMFJ) which campaigned against the ‘Union Government’ concept by General I.K. Acheampong, then Head of state of Ghana and Chairman of the Supreme Military Council (SMC). This was an attempt by the military regime to extend military rule instead of handing back power to civilians. After the fall of the SMC, he stood for president in the 1979 Ghanaian presidential election on the ticket of the United National Convention coming third with 17.41% of the popular vote. Eventually, he became chairman of the Council of State for the Third Republic.