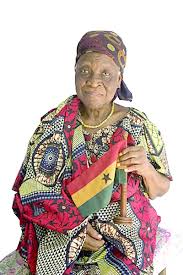 Theodosia Salome Okoh  was a Ghanaian stateswoman, teacher and artist known for designing Ghana’s flag in 1957. She also played a leading role in the development of hockey in Ghana.

She started school at Ashanti Efiduasi Primary School, continued to the Basel Mission Middle, Senior and Teacher Training Schools in Agogo and then Achimota School, where she received three years training in Fine Art.

When on Ghana’s Independence from Britain the need for a new flag was advertised, she submitted her design, which was adopted as the national flag of Ghana by the country’s first president Kwame Nkrumah from 6 March 1957. As she explained in an interview: “I decided on the three colors of red, gold and green because of the geography of Ghana. Ghana lies in the tropics and blessed with rich vegetation. The color Gold was influenced by the mineral rich nature of our lands and Red commemorates those who died or worked for the country’s independence. Then the five-pointed lone star which is the symbol of African emancipation and unity in the struggle against colonialism….”

Theodosia Okoh was the first female chairman of the Ghana Hockey Association and later President of the Ghana Hockey Federation for more than 20 years, and it was during her tenure that Ghana first qualified for both the Hockey World Cup and the Olympic Games.[5] She was named “the Joan of Arc of Ghana hockey” by Ohene Djan “because she rose to the occasion to save Ghana hockey when men were faltering and vacillating about development of the game. This is also the reason why the National Hockey Stadium was named after her in 2004”. She was a long-time patron of the Ghana Sports Writers’ Association of Ghana. We celebrate a hero.

Hannah Kudjoe (December 1918 – 9 March 1986), née Hannah Dadson, was a prominent activist for Ghanaian independence in the 1940s and 1950s. She was one of the first high-profile female nationalists in the movement, Read more…

Nana Addo Dankwa Akufo-Addo (born William Addo Danquah Akufo-Addo; 29 March 1944) is the President of Ghana, in office since January 2017. He previously served as Attorney General from 2001 to 2003 and as Minister for Read more…