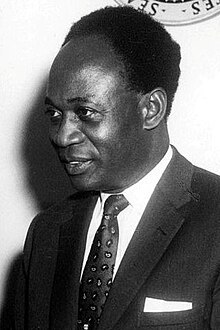 Kwame Nkrumah led Ghana to independence from Britain in 1957 and served as its first prime minister and president. Nkrumah first gained power as leader of the colonial Gold Coast, and held it until he was deposed in 1966.

An influential 20th-century advocate of Pan-Africanism, he was a founding member of the Organization of African Unity and was the winner of the Lenin Peace Prize in 1962.

Kwame Nkrumah was born in about 1909 in Nkroful, Gold Coast. Although his mother, whose name was Nyanibah, later stated his year of birth was 1912, Nkrumah wrote that he was born on 18 September 1909, a Saturday. By the naming customs of the Akan people, he was given the name Kwame, the name given to males born on a Saturday. During his years as a student in the United States, though, he was known as Francis Nwia Kofi Nkrumah – Kofi is the name given to males born on Friday.

Beginning in April 1949, there was considerable pressure on Nkrumah from his supporters to leave the UGCC and form his own party. On 12 June 1949, he announced the formation of the Convention People’s Party (CPP), with the word “convention” chosen, according to Nkrumah, “to carry the masses with us”. There were attempts to heal the breach with the UGCC; at one July meeting, it was agreed to reinstate Nkrumah as secretary and disband the CPP. But Nkrumah’s supporters would not have it, and persuaded him to refuse the offer and remain at their head.

Ghana became independent on 6 March 1957. As the first of Britain’s African colonies to gain majority-rule independence, the celebrations in Accra were the focus of world attention; over 100 reporters and photographers covered the events. United States President Dwight D. Eisenhower sent congratulations and his vice president, Richard Nixon, to represent the U.S. at the events. The Soviet delegation urged Nkrumah to visit Moscow as soon as possible. Ralph Bunche, an African American, was there for the United Nations, while the Duchess of Kent represented Queen Elizabeth. Offers of assistance poured in from across the world. Even without them, the country seemed prosperous, with cocoa prices high and the potential of new resource development.

As the fifth of March turned to the sixth, Nkrumah stood before tens of thousands of supporters and proclaimed, “Ghana will be free forever”. He spoke at the first session of the Ghana Parliament that Independence Day, telling his new country’s citizens that “we have a duty to prove to the world that Africans can conduct their own affairs with efficiency and tolerance and through the exercise of democracy. We must set an example to all Africa.”

Asamoah Gyan (/ˌæsəˈmoʊə ˈdʒɑːn/ ASS-ə-MOH-ə JAHN; born 22 November 1985) is a Ghanaian professional footballer who plays as a striker for Legon Cities FC and is the former captain of the Ghanaian national team. Gyan Read more…

John Dramani Mahama (/məˈhɑːmə/ (About this soundlisten); born 29 November 1958) is a Ghanaian politician who served as President of Ghana from 24 July 2012 to 7 January 2017. He previously served as Vice President Read more…

Michael Owusu Addo (born July 10, 1988)[3] known professionally as Sarkodie (/sɑːrˈkɔːdiɛ/), is a Ghanaian rapper, songwriter and entrepreneur from Tema.His contributions to the Ghanaian music industry have earned him numerous accolades, including the Vodafone Read more…