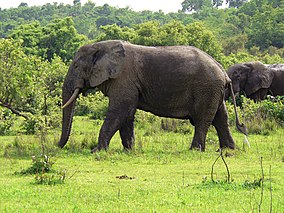 Mole National Park is Ghana’s largest wildlife refuge. Famous for its elephants, Mole National Park is located in northern Ghana and is the biggest national park in the country. The park covers an estimated 4,577 square kilometers in the district of West Gonja and is home to several species of mammals and birds. It is no surprise that this Ghana National park rates as the most popular game park and the most visited of all parks and reserves in Ghana.

Tamale, the capital, is the country’s fourth largest city. It is the nerve center of all commercial activities in the whole of the Northern Sector of Ghana. Tamale is an incredible juxta-position of the ancient and modern. The traditional architecture of round huts with conical thatched roofs are sights to see.

The rains come between May and October followed by the dry season which peaks in December and January with the dry Harmattan winds from the Sahara Desert. This tropical climate sustains the Guinea Savanna vegetation made up to grassland, clusters of shrubs, short trees and a sprinkling of big trees like mahogany and baobab. Maximum temperature levels of about 38 degree Celsius occur in March to April and minimum temperature levels of about 19 degree Celsius in January.

Lake Bosomtwi also sometimes spelled Bosomtwe, is a lake formed by an ancient meteorite strike in the Ashanti Region. The name means Antelope God because it is said to be discovered by a hunter chasing Read more…

The pond is located in Paga in the Upper East Region of Ghana, and is 44 kilometres (27 mi) outside Bolgatanga, the regional capital. It is inhabited by wild West African crocodiles, with some up to Read more…

The spectacular scenery of the 400-year old stilt propped water settlement of Nzulezu, built on Lake Tadane in the Western Region, stands out as a magnificent interplay between man and his environment. Nzulezu is an Read more…