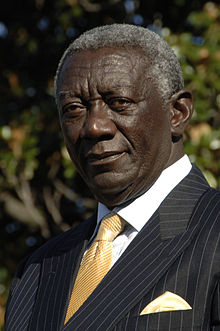 John Kofi Agyekum Kufuor (born 8 December 1938) is a former President of the Republic of Ghana (President from 2001 to 2009). He was also Chairperson of the African Union from 2007 to 2008. His victory over John Evans Atta Mills after the end of Jerry Rawlings’ second term marked the first peaceful democratic transition of power in Ghana since independence in 1957.

Kufuor’s career has been spent on the liberal-democratic side of Ghanaian politics, in the parties descended from the United Gold Coast Convention and the United Party. He was a minister in Kofi Abrefa Busia’s Progress Party government during Ghana’s Second Republic, and a Popular Front Party opposition frontbencher during the Third Republic. In the Fourth Republic he stood as the New Patriotic Party’s candidate at the 1996 election, and then led it to victory in 2000 and 2004. Having served two terms, in 2008 he was no longer eligible for the presidency.

Kufuor was one of the famous Ghanaian national heroes and he was elected on 29th January, 2008 the next Chairperson of the African Union for the 2008-2008 AU sessions.

Hannah Kudjoe (December 1918 – 9 March 1986), née Hannah Dadson, was a prominent activist for Ghanaian independence in the 1940s and 1950s. She was one of the first high-profile female nationalists in the movement, Read more…

Nana Addo Dankwa Akufo-Addo (born William Addo Danquah Akufo-Addo; 29 March 1944) is the President of Ghana, in office since January 2017. He previously served as Attorney General from 2001 to 2003 and as Minister for Read more…