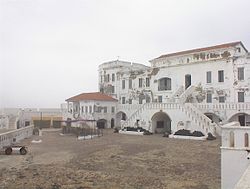 Cape Coast Castle is one of about forty “slave castles”, or large commercial forts, built on the Gold Coast of West Africa (now Ghana) by European traders. It was originally built by the Swedes for trade in timber and gold, but later used in the trans-Atlantic slave trade. Other Ghanaian slave castles include Elmina Castle and Fort Christiansborg. They were used to hold slaves before they were loaded onto ships and sold in the Americas, especially the Caribbean. This “gate of no return” was the last stop before crossing the Atlantic Ocean.

The castle, or castle and dungeon, to give it its official name, was first restored in the 1920s by the British Public Works Department.

In 1957, when Ghana became independent, the castle came under the care of the Ghana Museums and Monuments Board (GMMB). In the early 1990s the building was restored by the Ghanaian Government, with funds from the United Nations Development Programme (UNDP), United States Agency for International Development (USAID), with technical assistance from the Smithsonian Institution and other NGOs.

The Cape Coast Castle, and other forts and castles in Ghana, are included on the United Nations Educational, Scientific and Cultural Organization (UNESCO) World Heritage List.