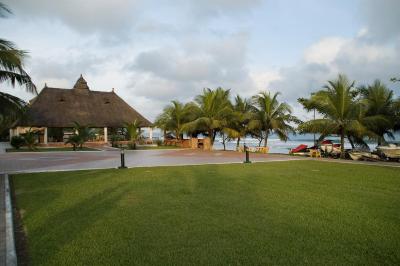 Busua is a beach resort and fishing village in the Ahanta West District of the Western Region in Ghana, about 30 kilometers west of the regional capital, Sekondi-Takoradi in the Gulf of Guinea. Busua is classified in the category of towns with more than 5,000 inhabitants, with a paved road from Sekondi to reach the town. The inhabitants speak the Akan language dialect Ahanta.

Busua has until the 1960s been a town with a tradition as a being an seaside resort for wealthy locals from Sekondi-Takoradi. In the 1970s and 1980s, there were also a number of European tourists who visit Busua, although there was until the late 1990s, neither electricity nor running water. A small bungalow resort was the only tourist infrastructure, electricity in the town was occasionally available in the weekends by a generator. In the early 1990s, the town was affected, as well as the whole of the surrounding coastal area of a palm disease which affected all the town’s coconut trees, so all the town’s coconut trees have now died. What remains is a long sandy beach, along a coastline that is free of dangerous currents.